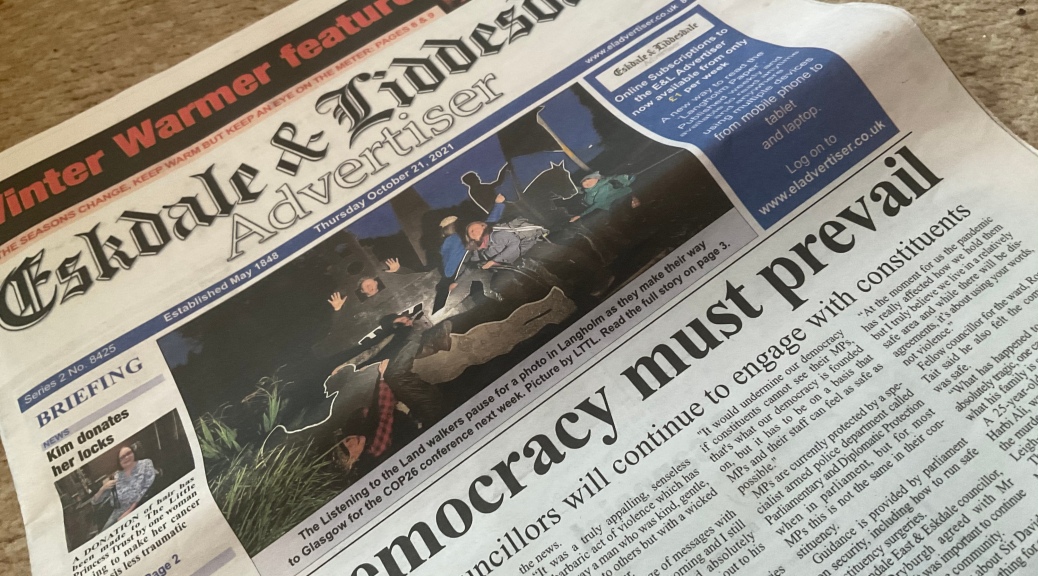 Is the Muckletoon of Langholm, in Southern Scotland, LEADING the people’s pushback against the encroaching, irrational dictatorship of environmental bureaucrats?

Sitting at the Eastern end of Dumfries and Galloway, the 2,000 strong town, long a #RedStateWarrior of Borders Rugby, is a potential fount of revolution against the ever greater, ever madder, encroachment of #Agenda2030: the UN’s hijacking of local councils, to impose unwanted infrastructure projects on small towns, as part of a wider plan to remove control of houses and land from the people’s grassroots to the misty summit of governments, banks and corporations.

The UN’s unelected worldwide micromanagement of life, housing, work, travel and energy has now extended — via manipulation of local governments — to the high-handed madness of imposing a scenery-wrecking wall along Langholm’s beautiful Esk river-front.

The community-splitting structure has been designated for Langholm by decree of Dumfries and Galloway regional council. Although Langholm has not suffered from flooding — despite the SEPA’s flood-driving refusal to dredge rivers — the regional council seems set to force the wall on the town, along with its attendant destruction of nature, tourism, fishing and scenery.

In the local newspaper, The Eskdale and Liddlesdale Advertiser, residents describe a supposed ‘consultation’ event as actually being a ‘statement of intent’.

If Dumfries and Galloway Regional Council is acting on behalf of its council tax payers, it needs to make next weekend’s consultation a genuine, two-way conversation. It needs to listen to local people’s views, and base its future decisions regarding the proposed wall on those, and on their holders’ collective ownership of their town, in legal supremacy to its own position as a non-proprietorial, people-funded executive committee.

The citadel of the Common Riding needs no unlawful instruction from its civic servants on how to manage and use its marches.