and wove a ballet from a run;

that shimmered for the frozen duped:

he sped and balanced, jinked and slid —

and sped again; and paused, amid

enchanted knowledge of the orb,

with shocks and bumps at once absorbed;

with melting strides which slid to hide

the rolling thread; which turned inside

and stopped – alive – then flicked,

and floated, leapt and kept, the charge,

once more to stretch, adept,

and hook and fall –

a beating portrait, ever more,

to ring as myth of ray-burnt lore.

With timeless truth, a Disney version of Cinderella echoed and confirmed the simple and gargantuan abuse of people in many nations around the world, this year and festive season, by those governments compliant with the #CovidCon.

BBC continuity announcer: ‘unlike us, Cinderella SHALL go to the ball’

In what may yet be seen as a misjudgment by corrupt power, the story was broadcast on UK terrestrial TV with tragic resonance. Continuity announcers did their best to intercept its message, with the vapid obsession of their coercion to conform to an establishment-pushed self-punishment. This followed a Christmas midnight mass which seemed to celebrate not just a reduction in consumerism, but official restriction of social life to small gatherings, for its own sake: a strange attitude for an organization that believes in the sanctity of the human spirit.

On the Feast of Stephen, Truth Excites wishes humanity love, happiness and the natural joy of the fiesta: unmuzzled by dehumanizing lies and fear, and empowered by the healthy self-love that overrides oppression — as exemplified, worldwide, by Cinderella: the poster girl of romantic revolution.

The #WreckingBall of the economy’s #ControlledDemolition is the #DoomBuffoon of terrorizing the public with a mythical plague that manipulates them to steal their wealth and freedom, as speeches by Klaus Schwab for the #WorldEconomicForum and the #GreatReset.com confirm, along with the #GreatReset’s own ads, and the WEForum.org website.

#DoomBuffoonBoris’ designer u-turns have disguised despotism as incompetence. He u-turned from herd immunity to lockdown, needlessly following the UN’s global-governance establishing plans. As open Sweden succeeded, the lockdown was fast established as a failed strategy, for a virus that he had known was already declining with herd immunity before he imposed it, yet he persisted with it. He u-turned on enforcing useless masks to choke and oppress.

Now he has u-turned on cancelling Christmas, as this continued obscene charade of staged sickness: using a virus which, in all its 99.8% survival insignificance, was probably man-made by globalists, judging by rare cases’ strange morphing pattern from colds to blood disorder.

Thus armed to imprison the general population, pending a cure for the common cold — famously non-existent as legend has it, though in truth present in much immunity-boosting, healthy food — those intent on destroying liberty declare draconian laws on unimportant issues, with the sole purpose of empowering muzzled police to impose invasive laws that make people feel controlled and afraid — and, at the same time, debilitate small businesses’ economic independence, top up fear (where the scam is starting to fail) and force the #GreatReset on a weakened, lockdown-thinned population.

!!! THE SQUALID SURRENDER OF A SHABBY OPPORTUNIST !!!

The weak evil shown by Boris Johnson — in contrast to Trump’s Herculean humanity, easy decisiveness and intent to bring life back — leaves no way back for his #PointlessPremiership, as EU shackles have been replaced by the toxic lead weight of direct UN rule.

For Brexit to mean freedom, Britain needs a Libertarian Republican Party — kick started by a huge, nationwide #TeaParty, to get rid of EVERY last one of the mad hatters presently poisoning life. 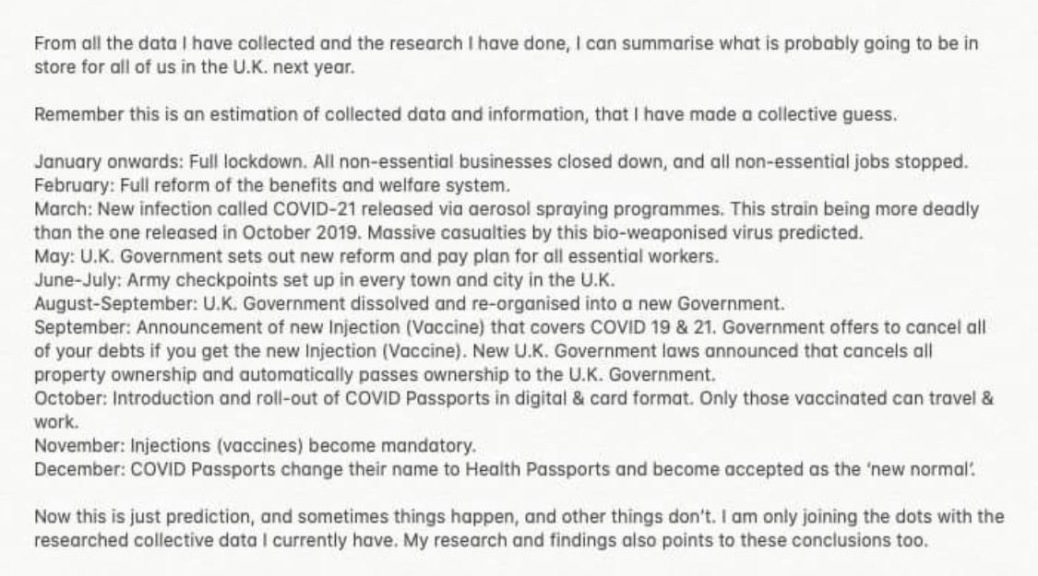 It de-humanizes people, by removing their connection to their effort and creations. Given the large scale of earning and profiting potential over a lifetime, in most cases the rumoured deal will leave the citizen poorer overall, as measured in currency in the present system. If vaccine-acceptance is needed, as well as life-long surrender of the right to own, for debt cancellation to proceed (tempting for those criminally impoverished by governments’ illegal lockdowns), then governments will be taking ownership of citizens and their works — having injected them, needlessly, under false pretences and using blackmail as coercion.

The abusive deceit of the people, by many governments, shows their unworthiness of trust. If this happens, the debt cancellations’ offerers will have shown themselves to be criminal blackmailers, with who no bargain should ever be countenanced.

If governments remove widespread home ownership from society, then the clearance of rural land, the creation of smart city ghettos, and the removal of public access to the countryside, as predicted by opponents of #UNagenda2030, would be more possible for authorities to instigate — especially with energy rationing smart meters, and the absolute, automaton authority of the #InternetOfThings, where driverless car use, travel, cooking, entry to and exit from buildings — as well as perhaps even thoughtwaves — could be centrally controlled, as Klaus Schwab describes in various orations to the #WorldEconomicForum, regarding the #GreatReset.com.

Understanding the UN’s aims will clarify the context of its actions. If the cyber-technocracy of Klaus Schwab is what they have in mind, then we have the people and the will to counter it and prevent this hellish cyber prison from forming at inception.

Accepting the blackmail-pushed vaccine could, chemically, physically and irreversibly, compromise our capacity to campaign for freedom, both by controlling our thoughts, and by reducing our numbers, either through induced disease or through sexually transmittable sterilisation.

As long as we retain the integrity of our consciousness and DNA, preserved — sacred and thriving — by refusal of this needless vaccine, then we have the will and numbers to counter this abominable evil.

As peaceful crowds gather outside Westminster Magistrates Court for Piers Corbyn’s anti-Lockdown verdict, the buildings shattered glass door serves as a timely metaphor for the damage done to the British establishment by its own lies.

Thanks to Piers Corbyn and others, people are now waking to the criminal vaccine project: the toxic deceit behind the scamdemic lockdown of the economy and, with it, human life energy. 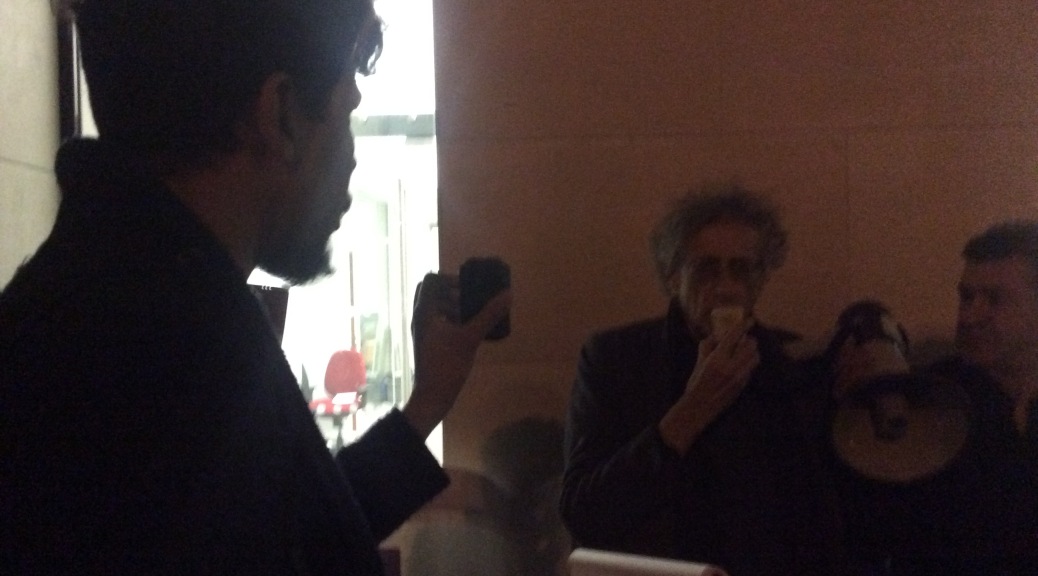 As SAGE-weaponised news media and public announcements frightened the collective subconscious into the refuge of believing fraudulent statistics of a claimed public health emergency, false logic corrupted both establishment sellers and public buyers of the hoax.

After decades of the education system’s deliberate corrosion by the Globalist-Fascist sedative of Cultural Marxism’ race to the bottom, removing — along with Latin, grammar, and rigorous mathematical proof — the liberation inherent in the teaching of thinking, the public conscious has become less critical, less astute and more gullible and vulnerable to abusive authority.

My thanks go to fellow activist Chris Woodward in drawing my attention to the words of a judge this week. In finding against Simon Dolan on his prosecution of the government for the lockdown, the judge said that there had been ‘no deprivation of liberty’ because there had been a public health emergency.

This is factually and philosophically incorrect. Even if there had been a genuine public health emergency, there were restrictions too — and, therefore, a deprivation of liberty. That a judge can sum up with such sloppy logic shows poverty of public debate and, therein, abuse of the population it serves.

Moreover, as Chris observes, the public health emergency has not happened: officials who cite it to justify life-wrecking lockdowns must be made to prove their assertion, and must be held personally liable for their policies, if necessary — and as with the police — using common law.

As Dolores Cahill said to John Mappin on #CamelotCastleTV earlier this year, the odds of a fit adult dying of Covid are less than those of being struck by lightening (1 in 330,000, as opposed to 1 in 320,000). Only 200 healthy people under 40 have died out of 70 million — from a complaint and virus not isolated under Koch Prostulates, as confirmed by Public Health England.

Why has government policy followed its script without responding to a manifestly pandemic-free reality? And why, as it has done this, have adverts supporting the lockdowns as energy savers appeared on London bus stops, from the #WorldEconomicForum and #GreatReset.com?

GreatReset’s celebration of private property’s imminent end has been aided by the locking-down of small businesses and free lives — and the forcing of more human beings to accept establishment’s Agenda2030-based terms for recovery aid from a fake problem that the establishment itself simulated.

When official information is honest and helpful, instead of modelled and manipulated or lying, there will be a basis for life and growth. To that end, the government needs to recover British sovereignty from the UN, the WHO and Klaus Schwab’s fascist WEF.

For the domestic political and judicial class to serve the public, not rule them for the UN, media and education must be plural and independent, and inductive of critical thinking, not blind conformism. This will fit with a return to celebration of divine humanity, thriving by tuning energy to life in a customer-led, demand economy, not suffocating under technocratic command fascism, built on computer modelled fantasies that programme people as a projection of themselves, and their human coders political will.